Guidelines for Concussion Management in Sports

An Overview of Concussion Management

The understanding of sports-related concussion has evolved dramatically in recent years. We now know that young athletes are particularly vulnerable to the effects of a concussion. Once considered little more than a “ding” on the head, it is now understood that a concussion has the potential to result in short or long-term changes in brain function, or in some cases, death.

What is a Concussion?

You’ve probably heard the terms “ding” and “bell-ringer.” These terms were once used to refer to minor head injuries and thought to be a normal part of sports. There is no such thing as a minor brain injury. Any suspected concussion must be taken seriously. A concussion is caused by a bump, blow, or jolt to the head or body. Basically, any force that is transmitted to the head causes the brain to literally bounce around or twist within the skull, potentially resulting in a concussion.

It used to be believed that a player had to lose consciousness or be “knocked-out” to have a concussion. This is not true, as the vast majority of concussions do not involve a loss of consciousness. In fact, less than 10% of players actually lose consciousness with a concussion.
What exactly happens to the brain during a concussion is not entirely understood. It appears to be a very complex injury affecting both the structure and function of the brain. The sudden movement of the brain causes stretching and tearing of brain cells, damaging the cells and creating chemical changes in the brain. Once this injury occurs, the brain is vulnerable to further injury and very sensitive to any increased stress until it fully recovers.

Common sports injuries such as torn ligaments and broken bones are structural injuries that can be seen on MRIs or x-rays, or detected during an examination. A concussion, however, is primarily an injury that interferes with how the brain works. While there is damage to brain cells, the damage is at a microscopic level and cannot be seen on MRI or CT scans. Therefore, the brain looks normal on these tests, even though it has been seriously injured.

If an athlete exhibits any signs, symptoms, or behaviors that make you suspicious that he or she may have had a concussion, that athlete must be removed from all physical activity, including sports and recreation. Continuing to participate in physical activity after a concussion can lead to worsening concussion symptoms, increased risk for further injury, and even death.

Symptoms Reported by an Athlete

Parents and coaches are not expected to be able to “diagnose” a concussion. That is the role of an appropriate health-care professional. However, you must be aware of the signs, symptoms and behaviors of a possible concussion, and if you suspect that an athlete may have a concussion, then he or she must be immediately removed from all physical activity.

When in doubt, sit them out!

When you suspect that a player has a concussion, follow the “Heads Up” 4-step Action Plan.

The signs, symptoms, and behaviors of a concussion are not always apparent immediately after a bump, blow, or jolt to the head or body and may develop over a few hours. An athlete should be observed following a suspected concussion and should never be left alone.
Athletes must know that they should never try to “tough out” a suspected concussion. Teammates, parents and coaches should never encourage an athlete to “play through” the symptoms of a concussion. In addition, there should never be an attribution of bravery to athletes who do play despite having concussion signs or symptoms. The risks of such behavior must be emphasized to all members of the team, as well as coaches and parents.
If an athlete returns to activity before being fully healed from an initial concussion, the athlete is at risk for a repeat concussion. A repeat concussion that occurs before the brain has a chance to recover from the first can slow recovery or increase the chance for long-term problems. In rare cases, a repeat concussion can result in severe swelling and bleeding in the brain that can be fatal.

A concussion can interfere with school, work, sleep and social interactions. Many athletes who have a concussion will have difficulty in school with short- and long-term memory, concentration and organization. These problems typically last no longer than a week or two, but for some these difficulties may last for months. It is best to lessen the student’s class load early on after the injury. Most students with concussion recover fully. However, returning to sports and other regular activities too quickly can prolong the recovery.
The first step in recovering from a concussion is rest. Rest is essential to help the brain heal. Students with a concussion need rest from physical and mental activities that require concentration and attention as these activities may worsen symptoms and delay recovery. Exposure to loud noises, bright lights, computers, video games, television and phones (including texting) all may worsen the symptoms of concussion. As the symptoms lessen, increased use of computers, phone, video games, etc., may be allowed.

After suffering a concussion, no athlete should return to play or practice on that same day. Previously, athletes were allowed to return to play if their symptoms resolved within 15 minutes of the injury. Newer studies have shown us that the young brain does not recover quickly enough for an athlete to return to activity in such a short time.
An athlete should never be allowed to resume physical activity following a concussion until he or she is symptom free and given the approval to resume physical activity by an appropriate health-care professional.

Once an athlete no longer has signs, symptoms, or behaviors of a concussion and is cleared to return to activity by a health-care professional, he or she should proceed in a step-wise fashion to allow the brain to re-adjust to exercise. In most cases, the athlete will progress one step each day. The return to activity program schedule may proceed as below following medical clearance:

If symptoms of a concussion re-occur, or if concussion signs and/or behaviors are observed at any time during the return to activity program, the athlete must discontinue all activity and be re-evaluated by their health care provider.

Concussion in the Classroom

Following a concussion, many athletes will have difficulty in school. These problems may last from days to months and often involve difficulties with short- and long-term memory, concentration, and organization. In many cases, it is best to lessen the student’s class load early on after the injury. This may include staying home from school for a few days, followed by a lightened schedule for a few days, or longer, if necessary. Decreasing the stress on the brain early on after a concussion may lessen symptoms and shorten the recovery time.

What to do in an Emergency

Although rare, there are some situations where you will need to call 911 and activate the Emergency Medical System (EMS). The following circumstances are medical emergencies: 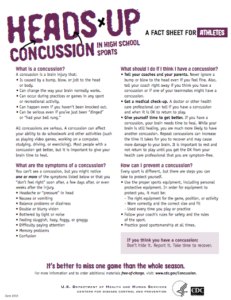 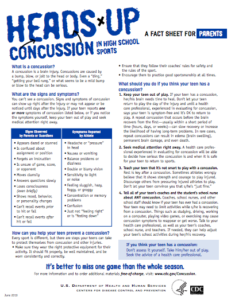 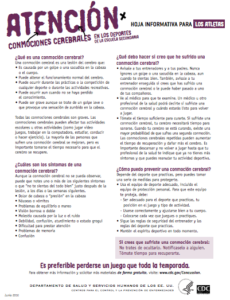 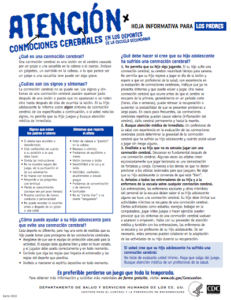 STAY IN THE GAME FOR LIFE